Structure of Parliament
Back to Home

The Parliament of India is the supreme legislative authority in the country and it is bicameral. It is divided into two houses – the Rajya Sabha, which is the Council of States, and the Lok Sabha, which is the House of the People. The Lok Sabha is referred to as the Lower house and the Rajya Sabha is referred to as the Upper house. The members of the Parliament are either elected by the people of India or nominated by the President of India. 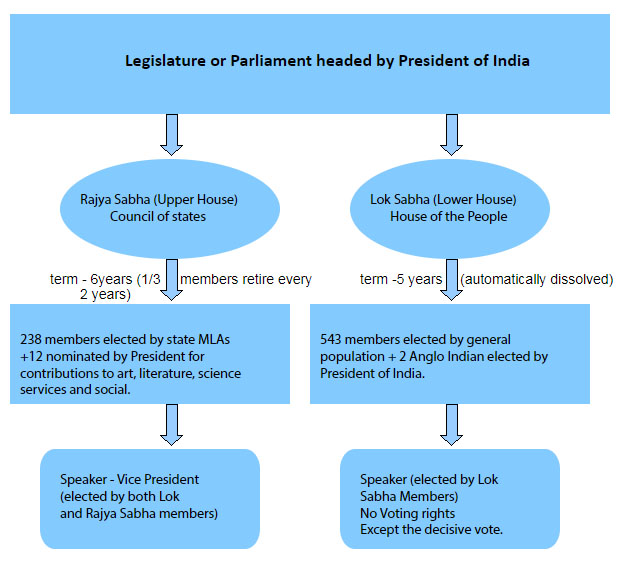 The Lok Sabha, also known as the Lower House, is the “House of the People”. It comprises 543 members who are elected from the (parliamentary) constituencies and two members of Anglo-Indian community who are nominated by the President of India. The citizens of India directly elect the 543 members exercising the universal adult franchise. All the Indian citizens, who are aged 18 years and above, irrespective of their gender, caste, religion or race, are eligible to vote to elect their representatives to the Parliament. The requirement for being elected in the Lok Sabha is that the person must be a citizen of India, should be mentally sound and should not be bankrupt and criminally convicted. The minimum age for membership of the Lok Sabha is 25 years. Out of the 543 parliamentary constituencies, 131 seats belong to the reserved category, 84 seats are reserved for the people belonging to Scheduled Casts (SC) and 47 seats are reserved for Scheduled Tribes (ST) categories.

Top 10 Facts about the Indian Parliament