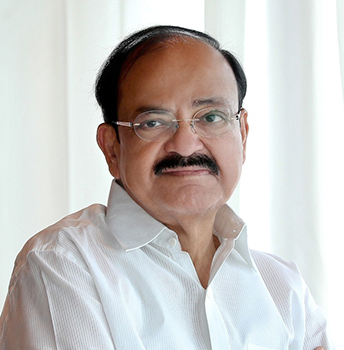 The Hon’ble Vice President of India

MuppavarapuVenkaiah Naiduwas born on 1 July, 1949 in Chavatapalem, Nellore in Andhra Pradesh, India.He is an Indian Politician and the present Vice-President of India.He is a student leader and a vociferous orator.He is a leader of Bharatiya Janata Party.He served as the Ministry of Housing and Urban Poverty of Alleviations & Urban Development and Information and Broadcasting in Narendra Modi government.He also served as a Minister for the Rural Development in the Atal Bihari Vajpayee’s cabinet from 2002 to 2004.He also served as its national president from 2002 to 2004. He was a swayamsevak in the RashtriyaSwayamsevakSangh and joined ABVP during his college days. He was elected as the president of the student union of colleges under the Andhra University. He came into the spotlight for his prominent role in the Jai Andhra Movement of 1972.He took to the streets in protest against the emergency and was imprisoned. From 1977–80, he was president of its youth wing. He writes an Articles in newspapers on the subjects of political and public interests. His Hobbies are Reading, educating and motivating people.He took the oath as Vice-President of India on 11 August 2017 at Darbar Hall, RashtrapatiBhawan, New Delhi.