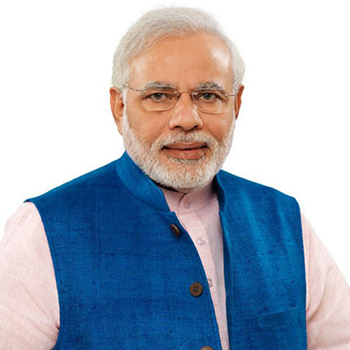 The Hon’ble Prime Minister of India

Narendra Damodardas Modiwas born on 17 Sep,1950 in Vadnaga, Mehsana district, Bombay State(Now Gujarat).He is a leading Indian politician and the current Prime Minister of India.He represents Varanasi constituency in the LokSabha.He is the most powerful leader of the Bharatiya Party(BJP).Previously he served as the Chief Minister of Gujarat state from 2001 to 2014 and he is the Member of Parliament for Varanasi state.He is the first Prime Minister of India who was born in ‘Independent India’, that is, post-August 15, 1947.He is also the first Indian prime minister whose mother was alive when he took office.He is a Hindu nationalist and member of the right-wing RashtriyaSwayamsevakSangh (RSS).In 1971 he became a full-time worker for the RSS.The RSS assigned him to the BJP in 1985, and he has held the several positions within the party hierarchy until 2001, rising to the rank of general secretary position.He appointed as Chief Minister of Gujarat in 2001. His policies as the chief minister of Gujarat State are credited with encouraging economic growth, have received praise.His administration has been criticised for failing to significantly improve health, poverty, and education industries in the state.He led the BJP in the 2014 general election and gave a majority in the Lok Sabha, the first time a party had achieved this since 1984. On 26th May 2014 he took oath as the Prime Minister of India.In July 2015 he unveiled the Digital India Mission to create a Digital India where technology plays a most important role in bringing a change in people’s lives.A Dynamic, dedicated and determined, He reflects the aspiration and hope of over a billion Indian Peoples.