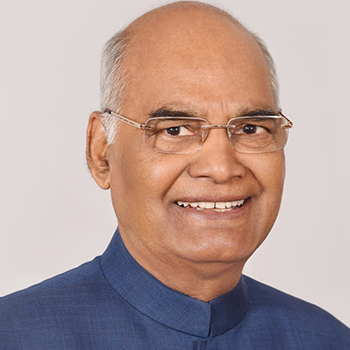 The Hon’ble President of India

Shri Ram NathKovindwas born on October 1, 1945, in Paraunkh village, near Kanpur district, Uttar Pradesh.He is the 14th and current President of India.He is a member of Bharatiya Janata Party(BJP).Previously he served as the Governor of Bihar state from August 16, 2015, to June 20, 2017.He is the second Dalit President of India.He was a Member of Parliament, Rajya Sabha from 1994 to 2006.Before he entering into the world of politics he practiced as a lawyer in the Delhi High Court and the Supreme Court for 16 years.He was Union Government Advocate in the Delhi High Court from 1977 to 1979 and Union Government Standing Counsel in the Supreme Court from 1980 to 1993. He became Advocate-on-Record of the Supreme Court of India in 1978.He completed his school education in Kanpur and obtained the degrees of B.Com and L.L.B. from Kanpur University. In 1971, he enrolled as an Advocate with the Bar Council of Delhi. In June 2017, he won the nomination of the Bharatiya Janata Party for President of India in the 2017 Indian presidential election.Hehas interest in reading books on politics and social change, law and history, and religion.